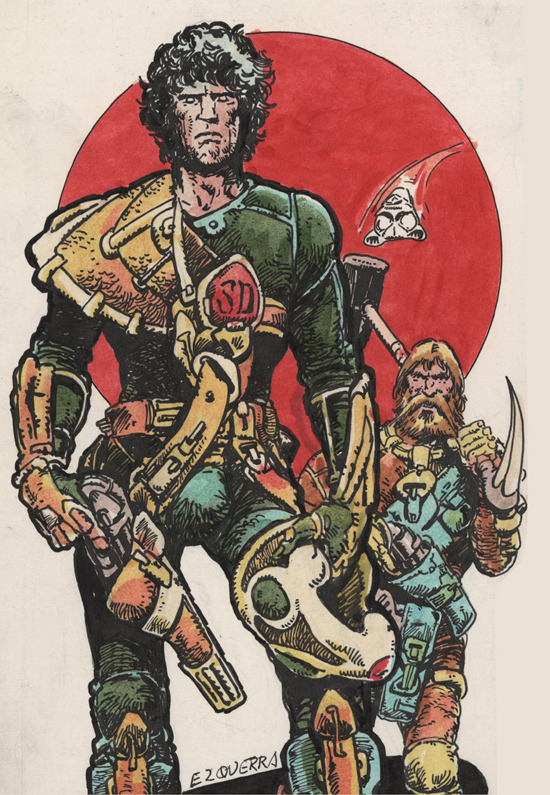 Launched in February 1977, few could have foreseen that the weekly science fiction comic 2000 AD would outlive its own title, but iconic characters such as futuristic lawman Judge Dredd, mutant bounty hunter Strontium Dog, infantryman Rogue Trooper and 50th-century everywoman Halo Jones have ensured ongoing critical and commercial success. Ostensibly produced by its extraterrestrial editor ‘Tharg’ and an army of script and art droids, 2000 AD was the brainchild of writers Pat Mills and John Wagner, who were eventually joined by fledgling writers Alan Moore, Neil Gaiman, Mark Millar and Grant Morrison, among many others, who provided shocking, surprising and satirical scripts for an ever-evolving stable of freelance artists.

Among the many artists featured in the exhibition are Dave Gibbons, Brian Bolland, Mike McMahon, Ian Gibson, Henry Flint, David Roach, award-winning fine artist Simon Davis, and the originator of Judge Dredd and Strontium Dog, Carlos Ezquerra. Alongside 2000 AD’s longer-lived characters, we have pages of gone but not forgotten strips such as Flesh, M.A.C.H.1, The Visible Man, and the 1970s reinvention of Dan Dare. More so than any other British comic, 2000 AD has been influential on the media world within and beyond these shores. Many of its artists and writers have also worked for the biggest comic publishers in the US.

There have been two blockbuster movies featuring Judge Dredd; big-budget fan-made films are viewable online; and parent company Rebellion produce best-selling computer games based on characters past and present. There is also a thriving market in the sale of original artwork, and this exhibition features pages generously loaned by artists and collectors, as well as material acquired by the Cartoon Museum’s Comic Creators Project with the support of the Heritage Lottery Fund.