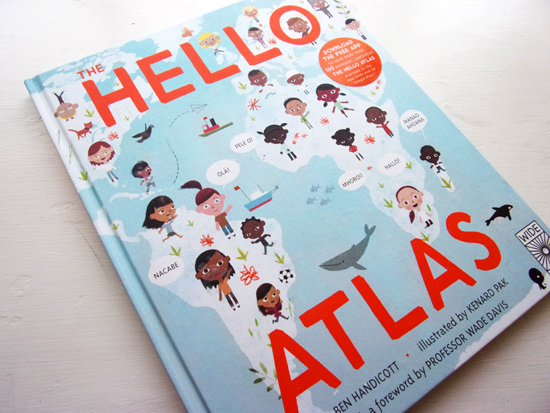 The cover is a gentle image of an atlas that wraps around the book. The friendly children populating the atlas greet the reader. This image describes exactly what we can expect of the contents. The title is bold and is accompanied by a round sticker, announcing a free App to download.

The App adds an extra dimension to the interaction with this publication. It’s useful because children can actually hear the words spoken in the language of their choice. I can imagine children copying the speech patterns and enjoying the new sounds and inflections from their counterparts living half a world away. 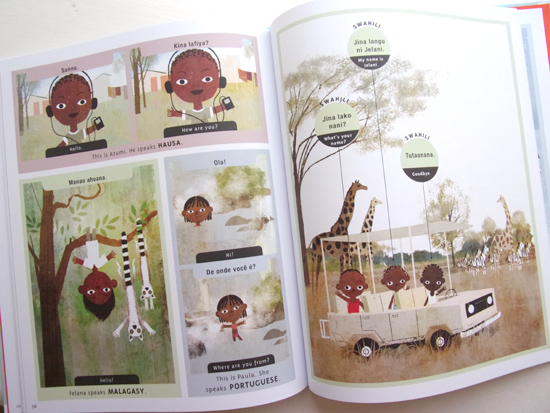 The premise is simple, all over our planet there are children and they all say the same things to communicate with one another. What is your name? My name is… How are you? I’m fine and HELLO. The book ranges across seven continents showing that humans are everywhere, what is it that makes them different but most importantly how much they have in common. There is an instructive foreword by Wade Davis, Professor of Anthropology at the University of British Columbia to give context to the evolution of spoken language. Author Ben Handicott has selected from a possible 7000 languages and 130 variations to give the reader a realistic idea of who we are and how articulate humans have become over thousands of years. There is also page on How To Use This Book. The structure first introduces the region of the Atlas, then a full-page location image followed by three featured languages per page for the majority of the region. 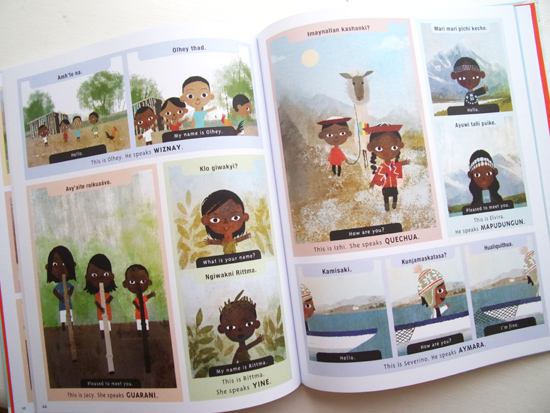 The illustrations by Kenard Pak are stylized to universalize the children with minimum room for accurate ethnic description beyond skin tone, hair shape and eye colour. There is one nod to regional individuality with the inclusion of Iceland’s best export after fish and Magnus Magnusson: Bjork! Where the artist succeeds best is in the full-page location images of places like Rio, South Thailand, North Africa, Kenya and New Zealand. The book is aimed at children aged six and older and the selected typefaces are easy to read for this audience. The page information hierarchy is aided by the inclusion of flat colours.

Wide Eyed Editions have produced a book that opens up the world to children and helps them to consider the differences in language and location but most importantly the exciting fact that it can be a friendly world with universal communication needs.

If you liked this book review then you may be interested in these books:

Atlas of the Human Body