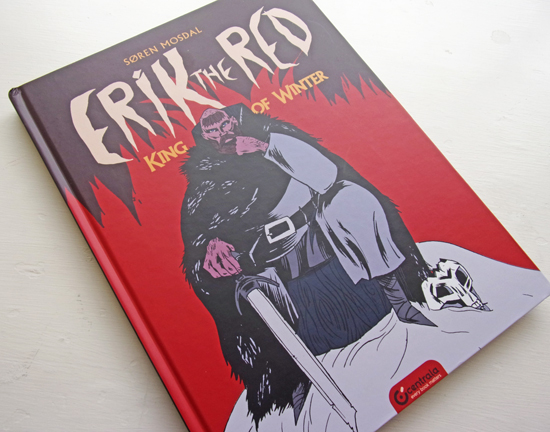 Upon reading Erik the Red, King of Winter by Søren Mosdal I was plunged back into a world I that I knew from books, half fantasy, half historical fiction, that ranged from The Lord of the Rings and the Narnia books to Stig of the Dump and onto the Eagle of the Ninth, Warrior Scarlet and Vikings Sunset.

My visual memory of these stories is inseparable from the artwork on their covers by, most notably, illustrators such as Charles Keeping, Pauline Baynes, Tolkien himself and also Alan Sorrell (whose archaeological illustrations were to be found in every Ancient Monument guidebook at that time).

Their representations of these other worlds share many common stylistic features: the people that inhabit these places are heroic, broad-shouldered figures or else weak and full of deception. The landscapes are full of dramatic contrasts: strong light/deep shadows, night/day, high summer/deep winter. They were visual interpretations of the stylised form of writing that paid homage to the ancient tales and myths, the sagas, the Norse precursors of the novel and the modern day soap. Strongly descriptive of the landscape and the natural forces that hold power over them.

Observant too, rich in significant detail, allegory, decorative and during rare moments of inattention, even comical. Emotions were held in check, until they explode when the characters were pushed too hard towards the edge. Søren’s work shows how much he has mastered this tradition and as I read (and reread) his graphic novel over several dark November evenings, it captivated the adult me with all the force of those children’s books. 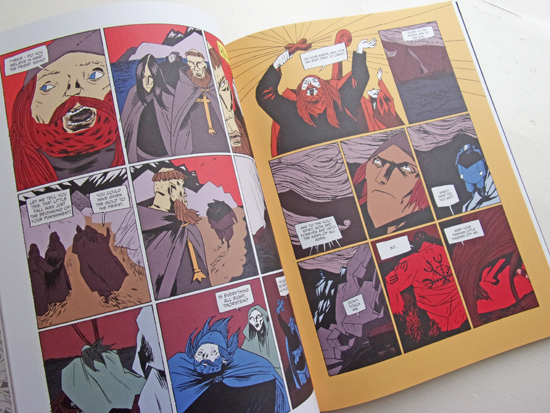 In contact with a publisher and looking for a suitable historic figure on which to base his project for a graphic novel, Erik the Red was the first name to pop into Søren’s head.

“I figured, being a Dane, it would be easy to do something about Vikings. The deal fell through though, but at that point I had already researched quite a bit, and had quickly realised I really didn’t know as much about the history of Vikings as I had thought. I discovered a wealth of great material, especially in the Icelandic sagas, and decided to do the comic anyway.

Erik The Red originates in one of those original sagas, but a fairly short one, so I decided to base my book on that, but also bring in/steal any idea from the other sagas and Viking myths, I saw fit.” 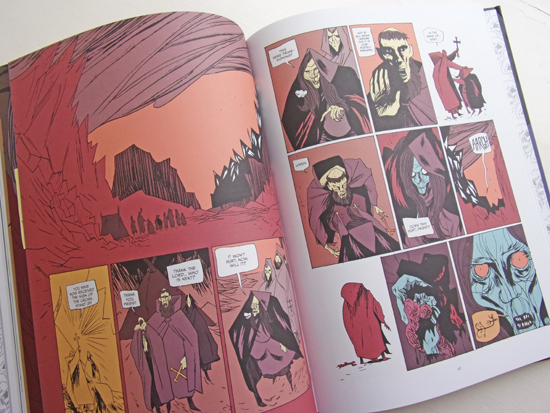 “So, my book isn’t completely historically correct, but everything in it has roots in historical “facts”. Of course much of the sagas are just stories and myths, but much of it based in historical events.”

Erik the Red in Søren’s account is a psychopathic killer and makes for a powerful story, set in a cold, desolate location where nobody can help you get out of your mess – and messy it is too. Following the bloody killing of his neighbours in a feud Erik is exiled to the arctic wastes of Greenland from the comparative comfort of his native Iceland. He is lord of all his domain until the return of his son from a long voyage bearing as passenger a missionary priest sent by the king of Norway to convert Erik’s people. The pagan Erik vows to serve his ancestral god’s and by whatever means necessary to ensure their continued worship. 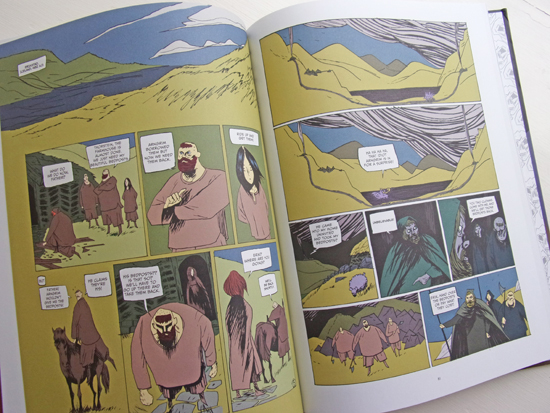 It is also broody, malevolant, desperate, a psychological thriller like Beowulf the Old English epic poem that coincidentally has its beginnings in Denmark. Its warrior hero has to stand up to Grendel, a monster from the foul waters of the marshlands who carries off his sleeping victims in the dead of night. Man as prey before his predator, the source of his greatest, most primeval fear. In Søren’s saga, Erik the Red is a monster of a man who embodies the combined forces of both man and beast. A great hulk of a man built to resist and rule over such a harsh kingdom, a mass of raw muscle, swarthed by layer upon layer of cloak and fur to protect him from the bitter cold. Held aloft by terribly undersized legs, a man among a people who live under the constant threat of being toppled, overturned, to be brought crashing down to the ground and their bloody end.

Yet this is only part of the story, maybe the most visually obvious, for as Søren explains there is a more subtler narrative revealed over several readings that makes this story so fascinating.

“Well, apart from the aformentioned sagas and myths, I was greatly inspired by The Sopranos.

My version of Erik the Red is essentially a story about a man in power, who makes a lot of very bad decisions, which end up alienating him from pretty much everyone close to him, not unlike Tony Soprano. Another similarity is that Erik, like Tony, is an old school guy, who’s not too impressed by the next generation. In short, you could say my comic essentially deals with the shortcomings of an exaggerated macho culture, that I’m both fascinated and repelled by.” 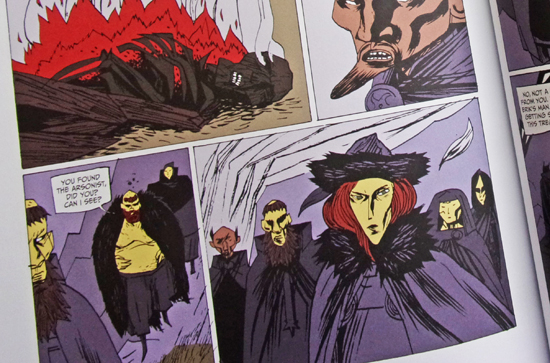 Another inspiration is what you might call anti-inspiration, because there’s a lot of comics about Vikings out there, but many of them done in a certain “hero” like style, with horned helmets, heros, and half naked women, and I wanted to do the exact opposite, and try and make a more “realistic” version of the Vikings. Graphically, I tried for a kind of raw drawing style, that I felt matched the raw nature of the environment of the Greenland in those days and conditions.” 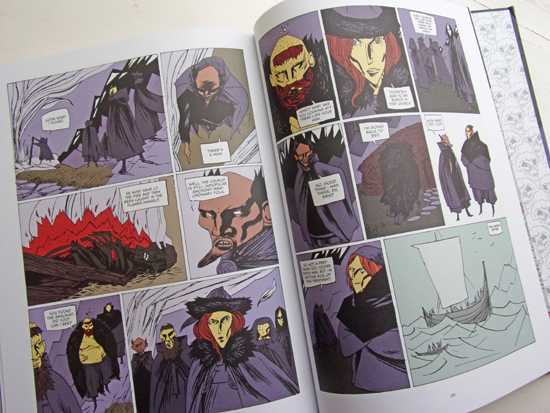 Originally joint-published in 2014 by Aben Maler, Denmark and Castermann, France, this edition has been published in the UK, with support from the Danish Arts Foundation, by Centrala who have been specialising in comics since 2007. Originally based in Poland they are now run between Poznan, Berlin and London and are dedicated to producing “beautifully published, well written and exceptionally drawn literature”. The resulting book is a slightly oversized format that gives more room for the spreads to reveal their richly detailed narrative. This has the added advantage of lending greater force to the larger full page and double page spreads as does the printing on heavy, matt paper stock that gives rich, dense depth to the colours, which further intensifies this emotionally charged account of Erik the Red, King of Greenland. As a Centrala publication it is every bit the book they champion: A picture of life in a solid frame.