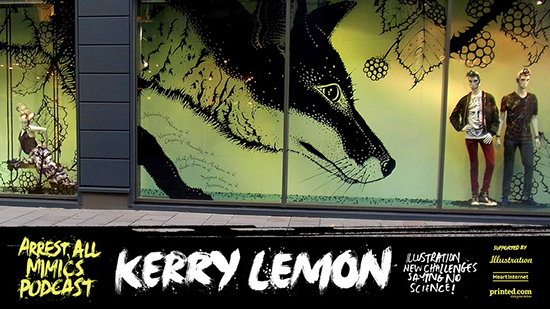 In this episode of Arrest All Mimics we hear from AOI Members Kerry Lemon. Working across a range of sectors from Editorial to Visual Merchandising, her impressive client list includes names like Harrods, Liberty, Marks & Spencer, Virgin Airways and Phaidon.

Ben Tallon says: “Kerry Lemon is a hugely inspiring example of just how much can be achieved, on your own terms with the correct balance of self-belief, drive, hard work, smart decision making and vision. With an unconventional route into the business, Kerry forges her own path, making smart moves to realise her ideas and project plans.”

Kerry discusses how a former planned teaching career just did not feel right and after returning to drawing, Kerry used the urgency she felt to start picking up work before a constant evolution process began and shows no signs of abating.

Now working on a mural in Japan whilst designing a block of flats in UK, Kerry can teach us a lot about the power we have over our own creative destiny

Listen to the new episode here!