AOI member, Mick Marston was invited to create an image (below) for the new Fair Terms for Creators website, set up as part of the campaign seeking for creators to be treated more equally when issued with contracts by commissioners. Illustrators will be aware that they are often asked to agree to contract terms they do not consider fair, but do not believe they have equal bargaining power. AOI are closely involved with this campaign, which is part of the Creators’ Rights Alliance

Mick was asked to depict a writer, illustrator, fine artist, photographer, journalist, musician, composer and film director to cover the many areas that creators are involved in. 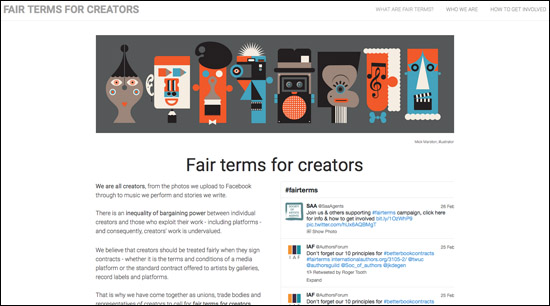 What are fair terms? The campaign for Fair Terms believe that there are seven areas of contract terms which need to be protected so that all creators, including members of the public who are often agreeing to contractual terms and conditions online, are protected when they sign a contract. These seven areas form the acronym CREATOR. They are all already in use elsewhere in the world or mirror existing consumer protection rights.

Clarity: Clear contracts, in written form, which transparently set out the exact scope of the rights granted / assigned / licensed and are timely and transparently negotiated.

Remuneration: Fair Remuneration. Equitable and unwaivable remuneration for each use / exploitation of work, to include ‘bestseller clauses’ so that if a work does far better than expected the creator shares in its success even if copyright was assigned.

Exploitation: An obligation of Exploitation for each mode of exploitation. Also known as the Use-it-or-Lose-it Clause. This is the French model

Ownership: Authors, including illustrators and translators, should be appropriately credited (cf metadata and ‘accurately credited somewhere’) for all uses of their work; the integrity of artistic works should be respected, and the Ownership of moral rights should be unwaivable.

Reasonable: All contracts should be subject to a general test of Reasonableness including a list of defined clauses which are automatically deemed to be void and a general safeguarding provision that any provision contrary to the requirement of good faith, causes a significant imbalance in the parties’ rights and obligations arising under the contract, to the detriment of the author shall be regarded as unfair.