For the cover of the Visionaries issue of Varoom, Jason Lamb‘s incredibly detailed illustrations from his Frackpool: The Legacy of Hydraulic Fracturing in Blackpool project felt like a perfect fit: imaginative, expansive, beautiful and examining alternative realities for this iconic seaside town.

Over an 80 year time span, Lamb’s Frackpool project speculates the transformation of Blackpool from an industrial Petropolis, to a less resource dependent and decentralized sustainable city, as Chinese investment prompts the transitory integration of hydraulic fracturing within Blackpool, for the exploitation of shale gas. Industrial infrastructure once used for hydraulic fracturing is repurposed to process energy crops and grey water from the region. Varoom asked Lamb a few questions on this project and his background.

Varoom: Can you tell us a little about the scale of the digital drawings and the perspective, where the eye is in the space?

Jason Lamb: Each drawing is a view from within the city that attempts to illustrate the various facets of the narrative. In addition to architectural speculation, the drawings are intended to illustrate the routine of daily life within the city. Through the production of each drawing some questions were answered, yet more were raised. It was this friction which often dictated the position of the next drawing. The positioning of the viewer within the space was as much about a discovery of the architecture, as it was an exercise in illustration. I hope that the drawings allow the viewer to step inside the project, and experience what it would be like to inhabit this alternate reality. 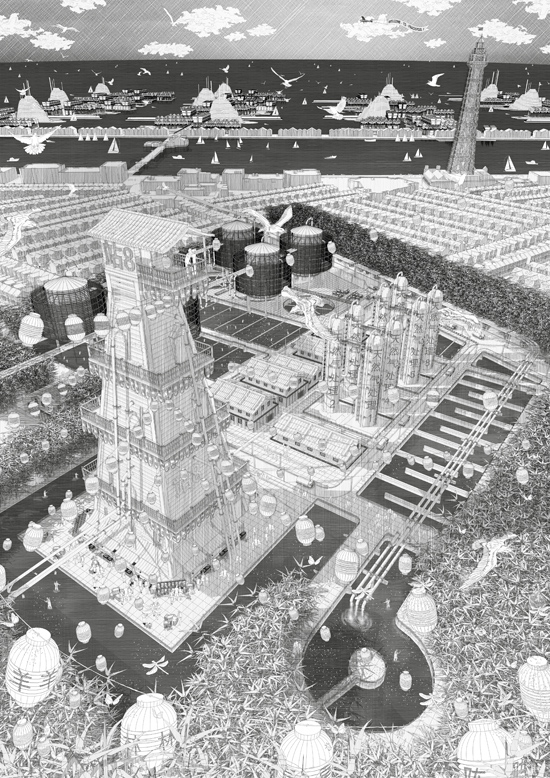 You’ve mentioned Chris Ware as a key influence, what is it about his work that inspires you?

I find Chris Ware’s illustration and storytelling extremely influential. Whilst producing the drawings for Frackpool I was conscious of the importance of the political and environmental issues which were being addressed. With this in mind, I tried to weave a thread of humour within the narrative, in the same way that humour is integrated within the drawings and books of Chris Ware.

Which spaces or buildings from fictional children’s books resonate from your childhood?

Any plans for other narrative works?

Frackpool was fundamentally a research-based project, with several months of research and ideas testing conducted before any drawing started. I am currently in the studio working up new narratives and testing new ideas with a continued interest in using fiction to pose serious questions about speculative scenarios and urban futures.

Lamb is featured in Varoom 31