A while ago our Awards Manager, Sabine Reimer, was approached by dpi magazine from Taiwan about being interviewed for issue 196 on the World Illustration Awards 2015 (WIA2015) and she happily obliged. 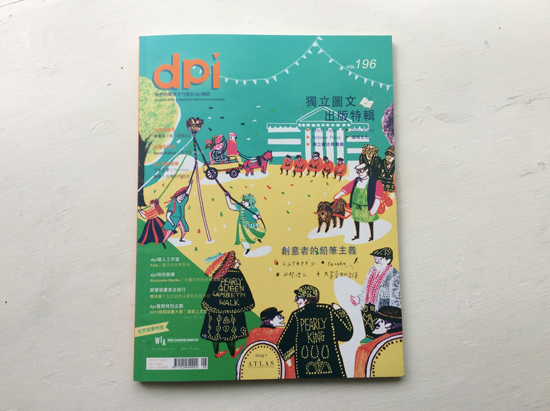 Answer 1: The World Illustration Awards and Exhibition is the most prestigious international industry event and continues the AOI’s 40 years’ history of running illustration Awards, previously known as ‘Images’, and now, for the first time as the WIA’s, in partnership with an international partner, the Directory of Illustration. The award and touring exhibition promotes contemporary illustration and provides a showcase of the greatest established and up-and-coming talent published around the world. The aim is to promote great illustration and to allow commissioners to easily find inspiration and spot new talent for their projects. 40 years ago the AOI Awards were the first of its kind to have an independent jury select featured work and to publish and distribute a comprehensive annual to commissioners of illustration. These days we publish a brochure with the highlights and Award winners, and promote the shortlist mainly via an online catalogue and social media channels.

The touring exhibition brings illustration to the general public and educates young and old about the creative process behind art that surround us in our everyday life.

The Awards have successfully launched the careers of young illustrators and inspired generations to follow their creative instincts. 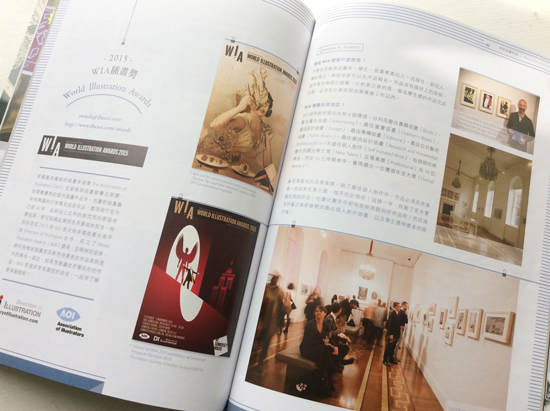 inside spread on WIA2015

Q2: We know there are works in 8 categories (Advertising, Books, Children’s Books, Design, Editorial, Public Realm, Research and Knowledge Communication and Self Initiated Work) being chosen. What are the requirements to each entries?

A2: Works can be entered into each of the eight categories by either professional or student artists. Advertising work would perhaps be used in a print campaign on billboards or on television; Editorial work featured alongside an article in a paper; Design work could be packaging; Self-Initiated covers projects developed by the artist and not in response to an external brief.

Professional work has to be commissioned except for the Self-Initiated category, but students or recent graduates  – we call this group New Talent – can enter uncommissioned projects into all categories. This results in more experimental work being featured with the entries as commercial requirements – such as legal guidelines for packaging for example – sometimes limit creative output. We believe that this keeps the categories fresh for the jury and often results in New Talent or Self-Initiated work being commissioned by the judges for upcoming projects. 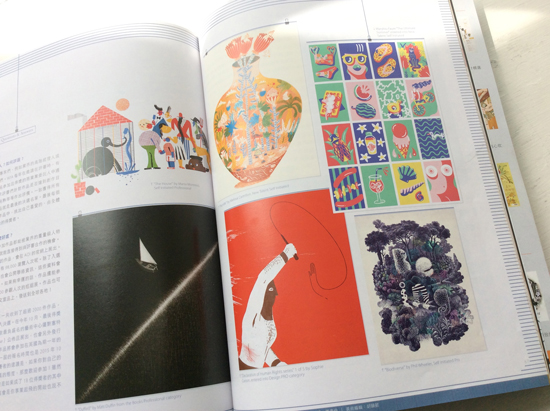 inside spread on WIA2015 shortlist

Q3: How should the participants submit their project? Is there any detailed part should be most aware? How do you define New Talent and Professional?

A3: All projects have to be entered via the online portal at theaoi.com/awards. It is important to prepare the images properly and submit high quality files that show either the strongest image of a whole project or a series of images in its variety. Along with the image we request information on the entry, such as usage, what was the brief, who commissioned it etc and it is important to add this information in a short but precise way so that the jury can quickly decide how well the work fulfills the brief, which is one of the shortlisting criteria.

Professional illustrators are practicing artists who make a living out of their craft and specifically with the awards, commissioned illustrators. New Talent is categorized as students or recent graduates (within 2 years of leaving education) who are just starting out. 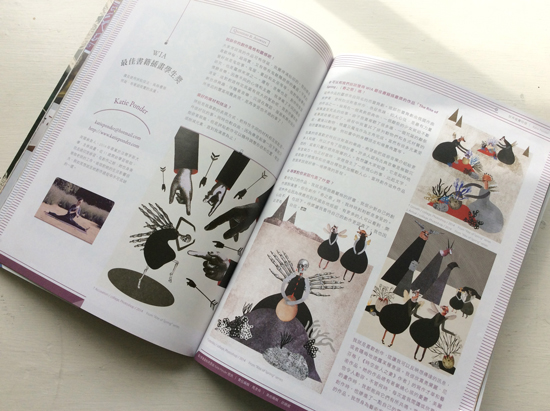 Q4: How will the jury of each year be decided? What are the criteria of judgment each year?

A4: We invite the jury from all over the world to reflect the new global aspect of the Awards. They are industry insiders, usually either high profile commissioners or illustrators themselves. We often take inspiration from the previous Award and invite winning commissioners onto the panel.

We ask the jury to mark each work according to how well it fulfils the brief, technical ability and skill. All work the jury agrees on will be shortlisted and each judge has a few “favourites” they can select, which will then be in contention to win an Award. 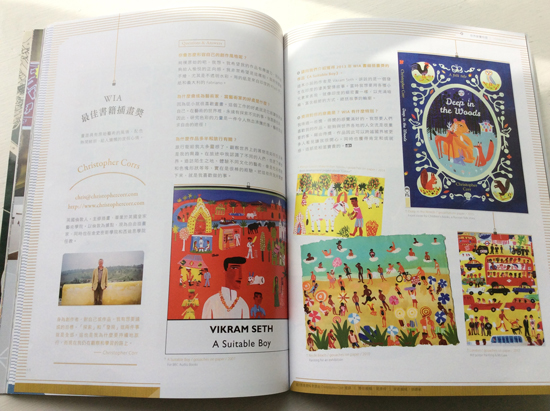 Q5: What are the benefits of entering the World Illustration Awards?

A5: All entrants will have their work judged by industry professionals and often get picked up for upcoming projects.

Should work be selected, it will featured on the AOI’s website which currently receives an average of 98,000 hits from around 19,000 visitors per month. We provide contact details if their work is highlighted in the archive, which is permanently featured on the site, work will be promoted across the AOI’s significant industry networks and there’s the opportunity to be selected for a touring exhibition which receives over 40,000 visitors every year.

There is also the opportunity to be selected and featured in an accompanying publication, which will be distributed to major commissioners across the globe. 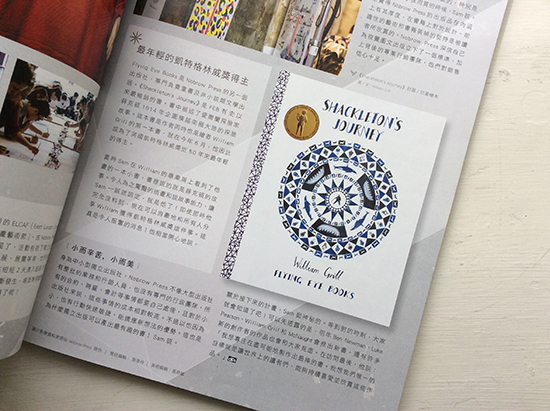 A6: In 2015 the WIA’s received a record amount of just over 2000 submissions. Out of these 180 were shortlisted by the jury and can now be seen online: theaoi.com/awards/awards-shortlist

There will be an exhibition in October 2015 at London’s famous cultural hub, Somerset House, where we will announce the category winners and launch the brochure before the exhibition tours the UK for a year. 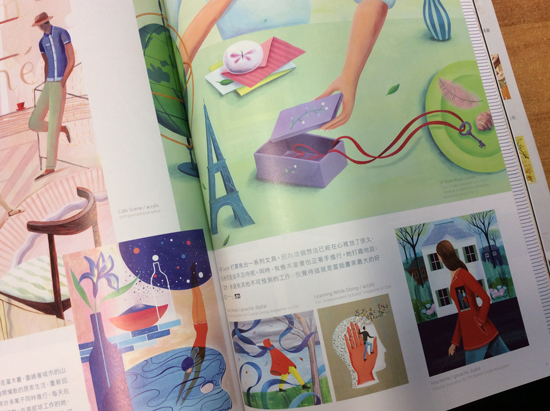 Q7: What is the most different part between the World Illustration Awards and other illustration competition?

A7: What sets the WIA’s apart from others is that they are judged by an independent jury from across the globe, but also that they receive entries from all over the world as well. By partnering with the Directory of Illustration we have combined the AOI’s 40 year history and standing as the UK premier Illustration Awards with the leading marketing program for illustrators in the United States, which gives us a brilliant scope for promotion. Anyone featured under the WIA umbrella is recognized to be of high quality and professional standard, even if you are just starting out.

Q8: What does the World Illustration Awards want to specify/suggest to all the illustrators who want to submit their work?

A8: The next call for entries will open in October 2015 and we can only encourage every artist who is serious about their career in illustration to enter. Competition might be tough but to be featured or possibly even win one of the 16 Awards might just make your career. 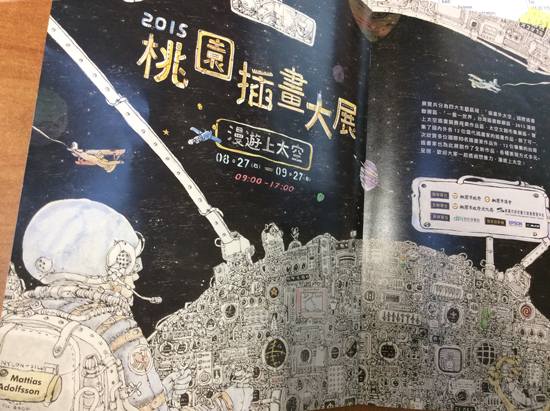