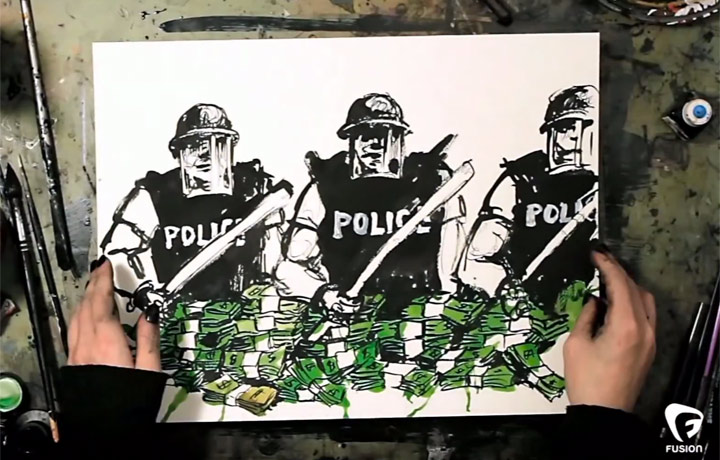 In Varoom 29 Politics issue editor John O’Reilly conducts a series of interviews with Jen Sorensen, Liza Donnelly, Mark Fiore and Molly Crabapple about the evolution of political cartoons in the 21st century.

In this extract, we give a glimpse of Mark Fiore and Molly Crabapple‘s approach on this subject within animation, showing how political cartooning can effectively transition to a digital format.

In making animated political cartoons, how did you discover/create a new process and aesthetic for your work?

Mark Fiore: My very early animated cartoons were basically repurposed print cartoons. Some of the earliest ones were multi-panel cartoons that I just broke up into their individual frames, had the text balloons write on and added a few character eye-blinks. Remember, there was no high speed internet to speak of in 1998 or 1999 so these files had to be about 70k or less! And since really nothing else yet moved on the Internet, people were blown away when ANYTHING moved. In other words, the bar for online animation was very low when I first began.

Having always loved animation and having been a freelance character designer on some projects, I knew enough about the basics of animation to be able to revel in the ability of doing it myself on a desktop computer. As more was possible online, I was able to do more with my animation. Now everything is everywhere so there really are no technical limitations to what you can create for digital. It really just comes down to time and money on the production and art side, to put it crassly. 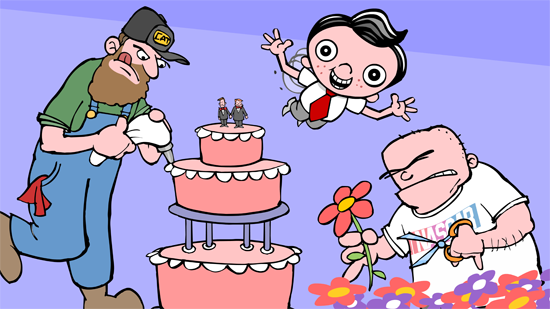 How did you arrive at the aesthetic groove and storytelling form for your animations?

Molly Crabapple: Me, Jim Batt and Kim Boekbinder have been working as an animation team for years. Our first piece was an elaborate paper puppet stop motion short called I Have Your Heart. Jim, the director, constructed streets, docks, and gardens out of my drawings, even cutting out thousands of individual ivy leaves. It’s exquisite, but it took three years. We developed the stop motion sketchbook style doing animations for the Royal Society of Arts, and then refined it, and made it more detailed, emotional and violent, to tackle the topics of police and prison violence for Fusion.

In essays on topics such as Google Glass and Photoshop your writing explores the boundaries of the political/technological/aesthetic. To what extent does new technology drive new ideas of the political?

Molly Crabapple: We live in a time where people have the most ability, in the history of the world, to speak to each other across borders. Yet, the security of physical borders is so brutally enforced that immigrants are dying in boats in the Mediterranean. The internet is a place of almost gnostic freedom where your most intimate thoughts are spied upon, that’s used to constrain your physical actions in ways the despots of yesteryear could never have dreamed. 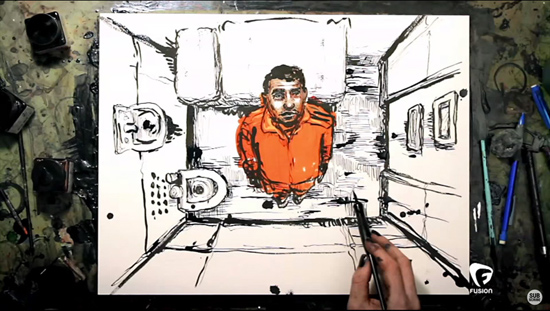