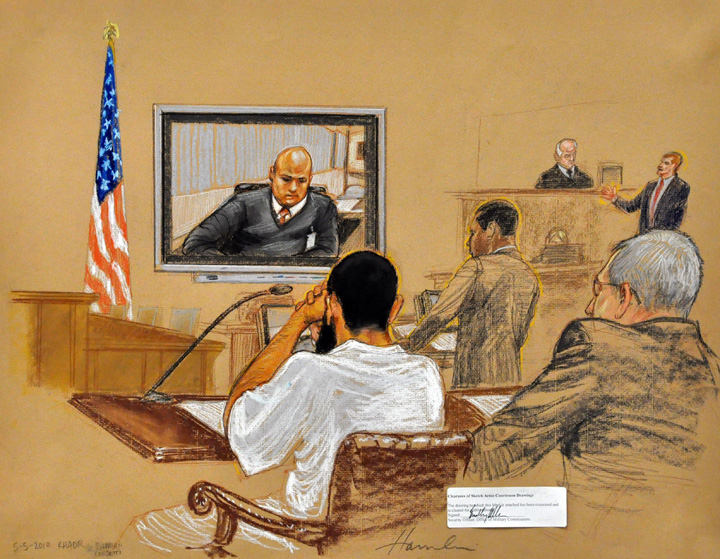 Here visual journalist Janet Hamlin expands on her interview published in Varoom 29, discussing how she captures the courtroom environment, the security situation and her materials.

Could you talk a little bit about the ‘official’ drawing you undertake and how you fulfill your role and creatively work within those parameters? Hearing you talk make me realize you calibrate and understand many things at once, taking everything presented to you into consideration and it is all very honest and real.

Janet Hamlin: The difficulty is highest with the 9/11 co-conspirators group. The courthouse that has been built especially for high-level group hearings has all observers sitting in the back of the court behind a soundproofed glassed-in observation room. Audio is piped in at a 40-second delay, and the glass windows are double-paned and reflective; hard to battle through that, a crowded courtroom, and draw the five defendants seated far away in the front, in detail. No binoculars or ‘ocular enhancement devices’ are allowed.

While I’m working, I try to really do my best to capture the environment, the postures, anything being shown that will not be visually available otherwise, which includes video or photographic images shown as evidence on monitors. To the best of my ability, I try to keep my opinions out and just draw what I’m seeing in others- their body language, reactions, gestures. 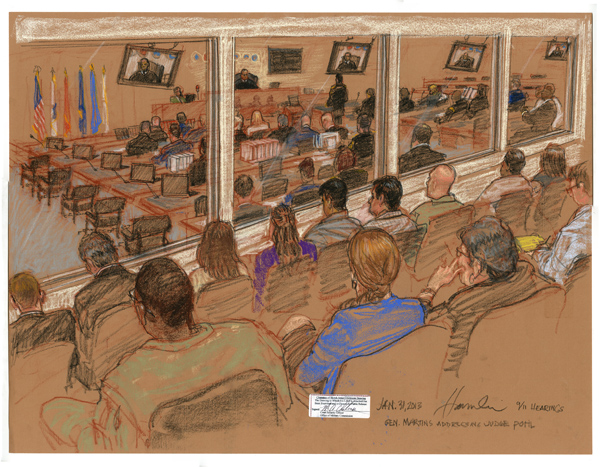 Time is of essence, so my job is also to be a visual editor -I have to compose in such a way that captures the most important elements but edits without fictionlizing. The integrity of my imagery, the truthfullness of drawing exactly what I’m seeing is of utmost importance. But time is a luxury, and often I’m laying in something only to have that person move or leave after just minutes of testimony. In such cases, a choice must be made to simply do a portrait.

Pastels allow for making changes on top of what’s been drawn, so is my medium of choice for that reason. It’s a rapid dry medium. Toned paper cuts down on building up the scene- I can pull lights and darks out quickly. I’ll bring color around areas of interest, and people of interest are detailed out first. Generally I begin with a close-up of the main focal detainee, then, given time, work whole scenes out, trying to get the complete presence of all involved if possible.

At times I will skew perspective in order to show victim family members in the viewing gallery as they observe through the windows what is going on behind glass. A scene like this is very important; since no other court exists with such barriers, but figuring out ways to fit such a view into a rectangular space was a challenge, and skewing the perspective worked.

I lived through 9/11 personally, and watched the towers burn and fall. So yes, I have a personal connection at a very base level, but when I am working as sketch artist I try to fulfill my job- which is, to put my emotions to the side and record what I am seeing and let the viewer come to their own conclusions, as a visual journalist. 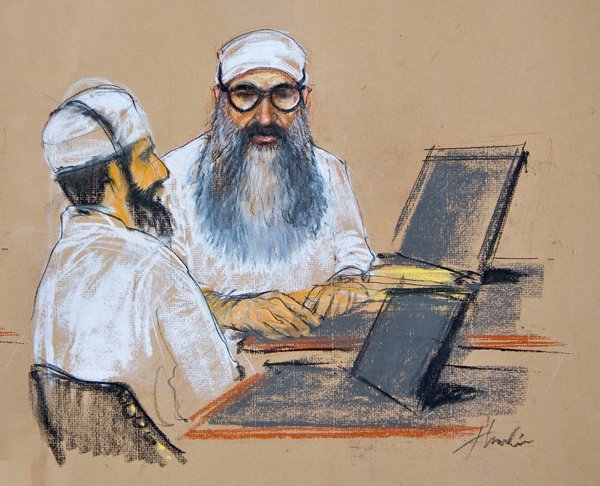 All observers must go through two security stations, similar to airport security. We go through a metal scanner, are then scanned by a wand, and our items are run through a conveyor scanner. Supplies are examined. ID’s are presented, and we sign in. We then sign in at a second gate and are again walked through a metal detector, show ID’s, items examined, and seats assigned. Upon exiting, one must sign out, showing ID at both stations.

Before any drawing goes out, it must first be reviewed by a Pentagon official, who may instruct me to blur out facial features here and there. He then signs off, and the sketch allowed to move out to media.

I am allowed to show the detainee and his counsel and judge- prosecution and any jury or other court personnel must not have defining facial features unless they specifically allow it. No exit or entry doors. No faces of witnesses who are not identified by their real name, such as ‘Interrogator 1’.

I am told this is for security and safety measures.

Also, no unflattering imagery of detainees are allowed to go out without approval via detainee’s legal team.This was best shown by the now infamous ‘nose incident’, my initial drawing of Khalid Sheik Mohammad was deemed very unflattering due to an unduly large nose. I was ordered to change it, using a photo as reference, before the drawing was signed off for release. (See Miami Herald report below)

I will say that this experience has been really amazing for an artist. It has been an honor. I cannot believe my love of figure drawing, and of art, would bring me to Guantanamo Bay, sketching the tribunals.