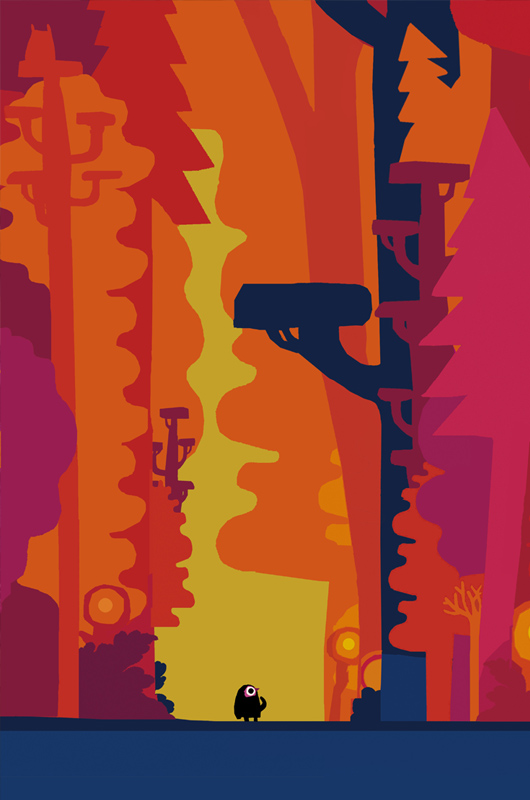 Your books ‘Oh No George’, ‘A Bit Lost’ and ‘Shh We Have A Plan’, have all become successes. What do you think the key elements are of creating an effective children’s book?

I am much more an illustrator than a writer. I tell my stories through pictures rather than words because actually I feel uncomfortable with writing. I have tried to write nice descriptive texts but they felt flat to me having worked with talented copywriters before, so I changed tack and tried to tell the stories entirely in pictures. Words are just as an extra to accompany the pictures. The funny thing is that is what makes the books so child friendly. Not only that but they translate really well and very easily because there is so little hinging on the text.

Your interest for Fair trade has led you to creating ‘Node’ working with illustrators creating rugs, how did this relationship begin?

I’ve been working as a designer for fair trade for the last ten years, mainly for the company People Tree and mainly as a voluntary thing. I just used to just help out when I could and send them some drawings and ideas from time to time. The work that came back was so beautifully hand-made that it gave me the idea to some day go over and somehow work directly with the makers out there and see what else we could develop. In 2010, I finished a children’s book and had some time and a little money so I moved to India and Nepal and ended up staying there for 8 months. I worked with four different groups in Nepal, mainly through People Tree. I made little cotton toys in a women’s shelter project called Mahaguthi. I developed other toys for people tree with another group called Dhukuti. People Tree introduced me to Kumbeshwar and when I saw the rugs being made I was totally hooked. They are so beautifully made. Not only that but KTS has such an inspiring history, it was set up as a non-profit by a family from the lowest caste who owned a successful business and wanted to help the rest of their caste out of poverty. It seemed like an amazing thing to team up with.

I started having the rugs made while I was out there, taking photos of their progress on the loom and showing my friends on twitter and on my blog. When I posted images of the rugs online it went viral and there was a lot of interest in both the objects and the story behind them. I was interviewed by Eye magazine, Fastcompany and others and people began emailing me with orders but I was unable to facilitate these myself. Illustrators and designers were asking me to create rugs with their images and I couldn’t facilitate this either. I sought the help of Akshay, a Nepalese friend I had met in Kathmandu. Akshay, like myself is interested in social business and madebynode.com was set up as a non-profit.

When I returned to London I did an exhibition of the fair trade work I had developed and invited potential buyers. The Design Museum shop manager came and she suggested we do a series of rugs for sale through them and a little show at the museum. 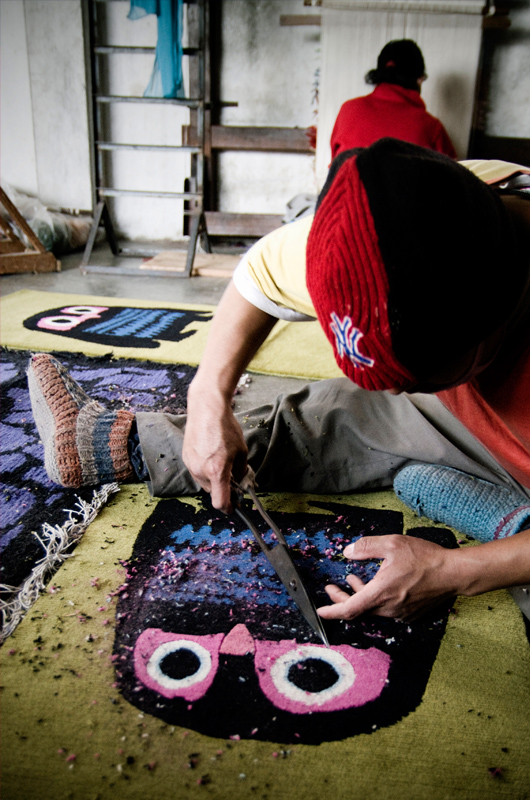 You have created apps such as ‘Hat Monkey’, turning your illustrations into and interactive format.  With apps such a big part of our lives, Do you see clients looking to use more interaction within commissions?

I guess so, there is only going to be more and more interactivity I guess. I found it very interesting to come up with and illustrate and animate a character’s reactions. It was a different thought process than the linear narrative of a book or animation. I think it’s a very interesting area. It is the birth of a new art form I suppose, a bit like early cinema its full of entrepreneurs and businessmen rather than artists so I think it’s a good time to try it out. I think its something an illustrator can create from the start rather than waiting to be asked. There’s app-making software now available like Pubcoder so it is doable to create a simple app yourself. 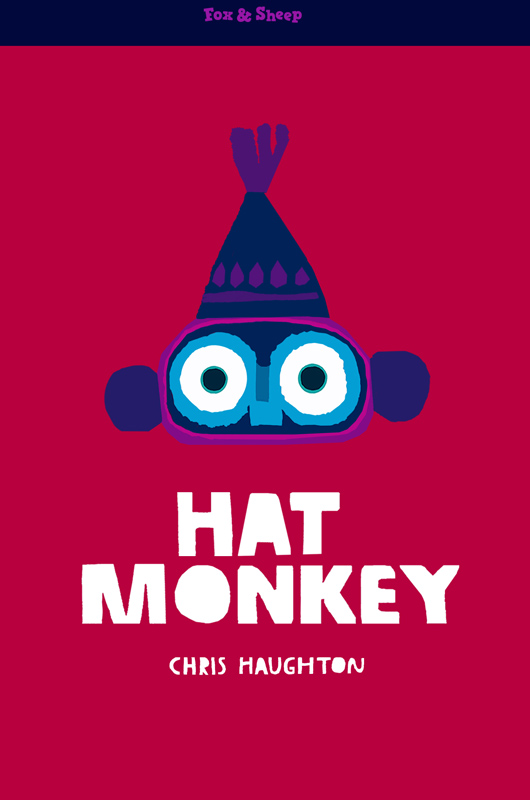 Tell us about a recent commission? What challenges did you face?

I just finished a project at a London Hospital.

I was asked to make a proposal and see if it would be accepted for a grant. Other than that it was sort of up to me which was quite challenging but a lot of fun. I went down to the hospital a few times and tried to imagine what I could put on the walls that would make it fun for the children. The walls are huge and so I imagined it would work best if everything were ‘actual size’ that way there is more drama to see a giant actual size elephant and dinosaur head peering down when all the rest of the crowd of animals are all to scale. All the various animals and dinosaurs are being looked after by monkeys dressed as hospital staff. To a child undergoing tests, the doctors and nurses must be very intimidating and it might be nice to share a silly joke that hopefully the children and doctors can both find humor in.

If you could go back to when you were starting off and give yourself one piece of advice what would it be?

I spent years never quite getting around to writing my first children’s book. I wanted to do it, and had some ideas but I was always busy working on other projects. When I finally did get to it I was so happy to see how well people responded to it. I was SO glad that I went through with it. It made me wish I had got around to it sooner as the books have done way better for me than any of the work I had done previously. As illustrators we are so lucky that we can create projects from the very start, children’s books, apps, products all need to be designed and illustrated and if the illustrator designs them from the start they are often much more thoughtfully made than if they are asked half way through to just add some illustrations to it. I know entrepreneurs who very often have to commission illustrators whenever they make a new business and are often frustrated that it doesn’t look right. We are lucky that we can make something look exactly as we want from the very start. 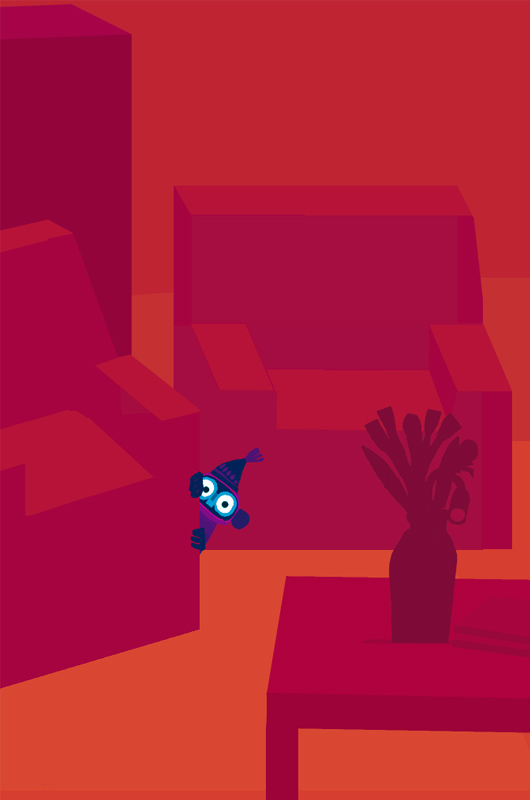 I am working on two books, one is a very simple book about going to sleep, it has a similar format to Eric Carle’s ‘The Very Hungry Caterpillar’ with the step-cut pages. It has a word count of about 50 words right now… my new record! Shh has 98. The other book is a non-fiction for much older children, right now its called ‘The History of Information’. It follows the history of writing, print, media to the Internet and the present day. It is told in large infographics and visuals by me and is being written by Loonie Park.