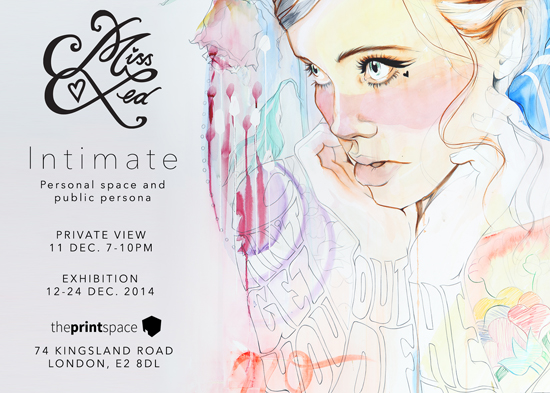 theprintspace are proud to announce award-winning painter and illustrator Miss Led’s first solo exhibition, entitled ‘Intimate’. The show also marks the artist’s second collaboration with theprintspace. London artist Joanna Henly – known as Miss Led – explores a key inspiration behind her work with range of emotionally rich and expressive mixed-media paintings and a large-scale wall installation in East London’s theprintspace gallery. In her style, the gallery space itself will become a canvas.

Miss Led said “Conceptually, the show is really about personal space; how we inhabit it and the ways we engage with it […] The exhibition title also relates to the installation accompanying the portraiture: a large scale painting across the walls of the gallery in which figures interact with interior motifs and organic shapes. I hoped to touch on home life, emotional space and our physical environment. I wanted to represent ways of expressing and projecting ourselves, personally and publicly – be this through fashion, skin adornment, posture, gaze or attitude.”