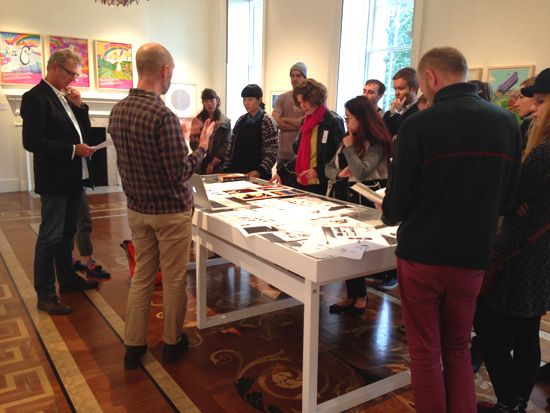 This afternoon illustrator Geoff Grandfield gave a talk about his practice to a gathered audience at the exhibition gallery in Somerset House. Geoff won the AOI Illustration Professional Award for working with The Folio Society to illustrate The Alexander Trilogy, a set of historical novels written by Mary Renault which dramatize the short life of the military leader Alexander the Great. 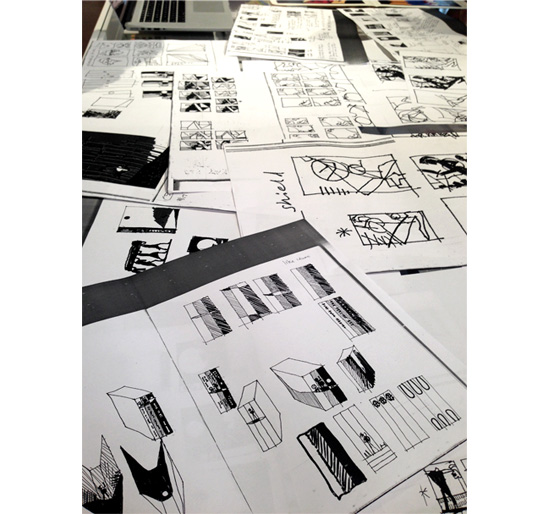 Geoff discussed the development behind The Alexander Trilogy in front of his exhibited work as he encouraged the audience to study his sketchbooks, as well as several blown-up photocopies of the thumbnails he used to work out the composition of the illustrations. Geoff stated that he seeks to find “balance or imbalance” within his illustrations, and upon examining the angles and the placement of light and dark within the bold compositions this focus becomes apparent.

When explaining his process, he mentioned that for him “it’s very much about trying to internalize imagery” and that some of his big considerations when choosing what part of a book to illustrate and how to do so were places, characters, action, description and pacing. He said that he wanted his illustrations to have a “silent atmospheric narrative” that wasn’t duplicating the text but instead “bringing another layer into the experience of reading a novel”.

You can read more about Geoff’s practice in Varoom 27: The Hermenauts issue, available to purchase here.

Geoff’s work will be on show at Somerset House until 2 November.