Following the success of the pilot scheme last year, Topolski studio and Reportager are running the 2nd Chronicle Residency Programme.

Over the next few months Illustration graduates, Ed Burn, Luisa Crosbie, Pat Macdonald, Jack Miller, Jack Wheatley and Georgia Wilson will be drawing in and around London culminating in a printed Chronicle and exhibition at the Topolski Studio on the South bank on 3rd October 2014 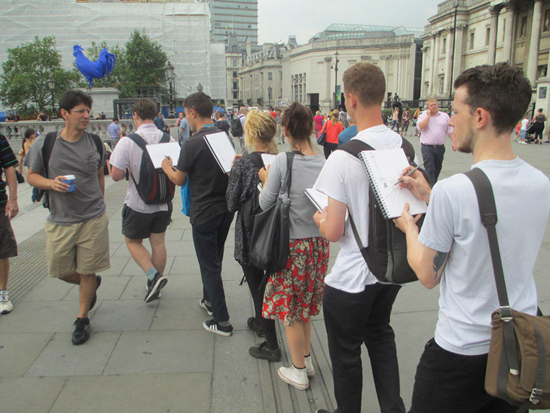 Sixty years since Topolski launched his Chronicles, Topolski Studio’s Chronicle for the Twenty-First Century and accompanying reportage drawings of London will be exhibited alongside Feliks Topolski’s original Chronicles and drawings, contrasting what Topolski recorded 50 and 60 years ago with what the young artists’ record today.

Alumni from the first residency programme will also be exhibiting. Matt Booker, Laura Fitton, Josh Morris, Alex Nicholson, Chloë Parke and Louis Vinet, will be showing work one year on from their participation in the Programme.

Andrea Marie, the education officer at Topolski Studio, Gary Embury editor of Reportager.org, and other master class artists, including Lucinda Rogers, Anne Howeson, Julia Midgley and Chloe Regan will be working with the residents towards producing the hand-printed Chronicle, a broadsheet of reportage drawing, chronicling contemporary issues of the Twenty-First Century. 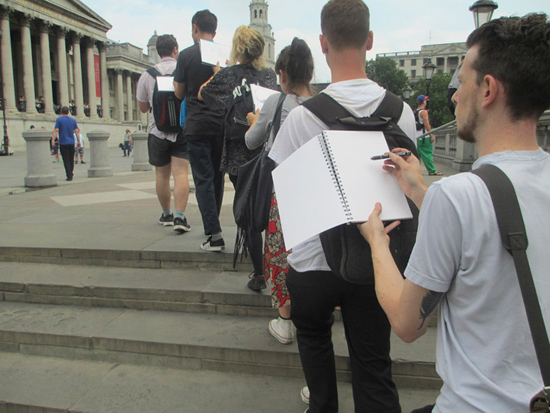 The residents were led on a Dérive last week by Gary Embury, starting from Topolski’s studio on the Southbank over the bridge, through Charing Cross, Trafalgar Square, Picadilly Circus, China Town, and eventually drawing back towards the Southbank. They then recorded through drawing the 70th birthday celebrations of renowned poet David Constantine as part of the South Bank Centre’s Poetry International event at the Royal festival hall.

As part of the Dérive, a Drawing Peloton was formed in homage to the Tour de France, winding its way through Trafalgar Square. Residents formed a moving reportage crocodile whereby each resident used the artists back in front to rest their sketchbook whilst walking and drawing the surroundings. The lead artist dictated the route, peeling off the front to join the rear when necessary. Drafting was encouraged and no accidents were reported, although many tourists were bemused by the spectacle.