An exhibition of the 50 best entries to the competition organised by the AOI in partnership with the London Transport Museum and sponsored by Serco. 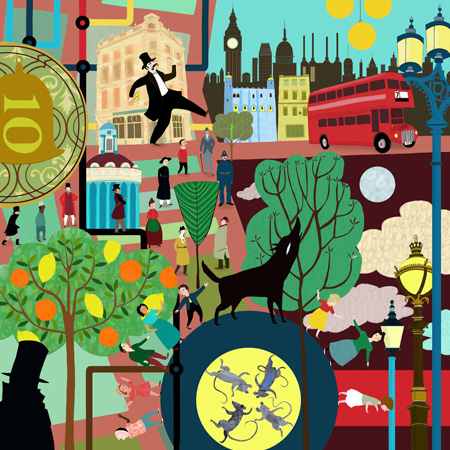 Across the ages, London has produced and inspired countless stories. Fictitious and real characters and events in this amazing city have always held fascination, from anecdotal urban myths to grand tales of historic legend.

London Stories, an exhibition featuring the best of the entries for The Serco Prize for Illustration 2014, opens on 14 February 2014 and will feature 50 works of art.

Entrants were asked to create an illustration which visually captures a well-known or obscure London narrative; stories that are contemporary or historical, real or imagined.

The shortlisted illustrations celebrate a vibrant, multi-layered London – urban myths, historic events, remarkable characters and London’s animal population. From ghost buses, Buffalo Bill’s Wild West Show of 1887 and Lenin’s ‘love letter to London’ to a Pearly King and Queen, and an escaped monkey jazz band. Other entries depict the ravens and the white bear of the Tower of London, Tin Pan Alley as well as literary and musical references such as The Picture of Dorian Gray, The Girl from Petrovka, Mary Poppins, Sweeny Todd and Oranges and Lemons.

There’s also a chance to explore the exhibition after hours and enjoy the opening evening of London Stories during the LTM’s Friday Late on 14 February 2014. There will be a bar and DJ and storytelling for adults on board some of the heritage vehicles; a chance to illustrate your own London Story with short illustration workshops, and to strike a pose in a photo-booth with a choice of props. Please see the LTM website for more info.

The exhibition closes on Sunday 6 April 2014.