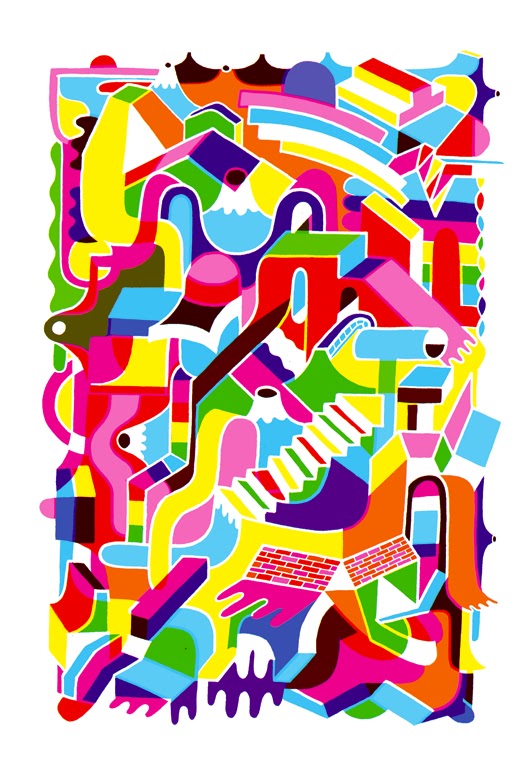 In college, I had a friend who would occasionally turn up to our graduate philosophy seminar on a skateboard – he always had interesting angles. I get a similar feeling looking at Camberwell graduate Rich De Courcy’s Wedges and Ledges work, of someone whose sense of space, whose sense of motion, and balance and fluidity enables him to see the world differently and show us what it feels like.

Walls slide into streets, banks jag into steps and ramps, shadows cast by trees snake across bricked malls, luridly bright colour separating the verticals and horizontals of space. Looking through the eyes of Rich De Courcy’s images feels like what is look through the eyes of the adaptive perception of the skateboarder.

In these the depth of field is an abrupt flip of colour, your eye swirling round the curves and banks of the image. It’s all motion. Skateboarding, like drawing or printing, is a practice of embedded knowledge, there is a kind of physical imagination. The skateboarder also has a heightened kind of ‘embodied cognition’ a sense of space and environment that is perceived not just through the eyes but through the body. 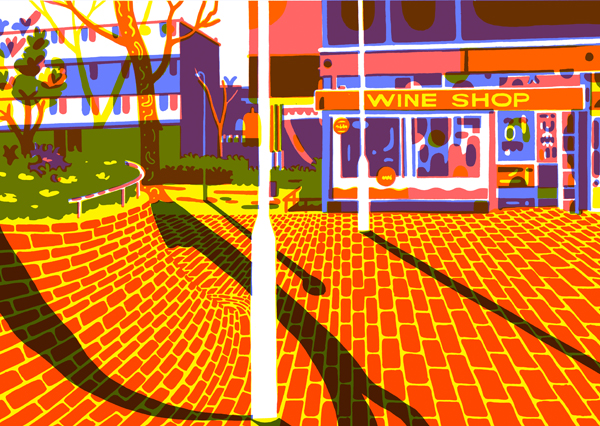 In his book Skateboarding, Space and the City: Architecture and the Body, the Bartlett’s Professor of Architecture and Urban Culture Iain Borden explores how skateboarders forge a different sense of space and how the physical act of skateboarding is an enactment of the imagery in skateculture: “The skateboard move is the projection of the self through the imaginary-and-real medium of the photograph: it is neither pure activity nor image, but a lived image. The skateboard run is at once a communication, development, a lived enactment of things such as the Influx digital journal or Skateboarder photographs.”  It’s not that skateboarders are acting out an image, skateboarding is a lived-image. 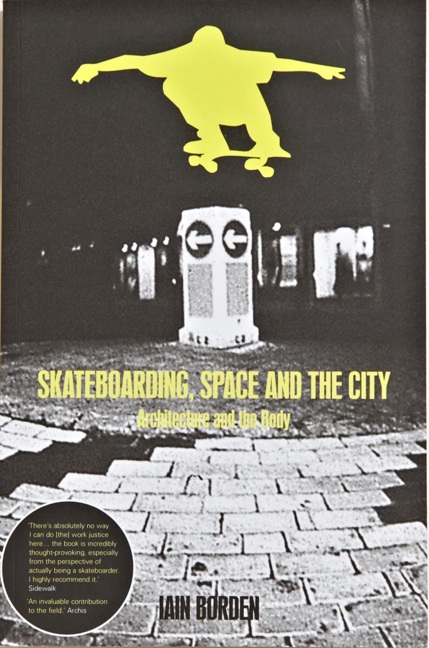 De Courcy’s image-making moves this idea forward. It’s not just about a dynamic relationship between the image and the human, it’s about how the human becomes enhanced, perceiving differently, sharper, sensitive to motion, compound perception with different planes of viewing and thinking. As Iain Borden writes, “skateboarders undertake a discontinuous edit of architecture and urban space, recomposing their own city from different places, locations, urban elements, routes and times…” The Skateboarder not only frames and edits space differently, but the physical act of skateboarding rewires how they process information. “Once you have been skateboarding for a long time you see every space and surface in relation to skateboarding,” says De Courcy. “It’s impossible to see a bank, bench or ledge without thinking about skateboarding.” Think about it in  evolutionary terms – from Homo Erectus to Homo Skateboardicus.

Wedges and Ledges is not just a fabulously rich-set of imagery, it provokes the question of the kind of knowledge and insight illustrators and image-makers can bring to commercial and professional projects. 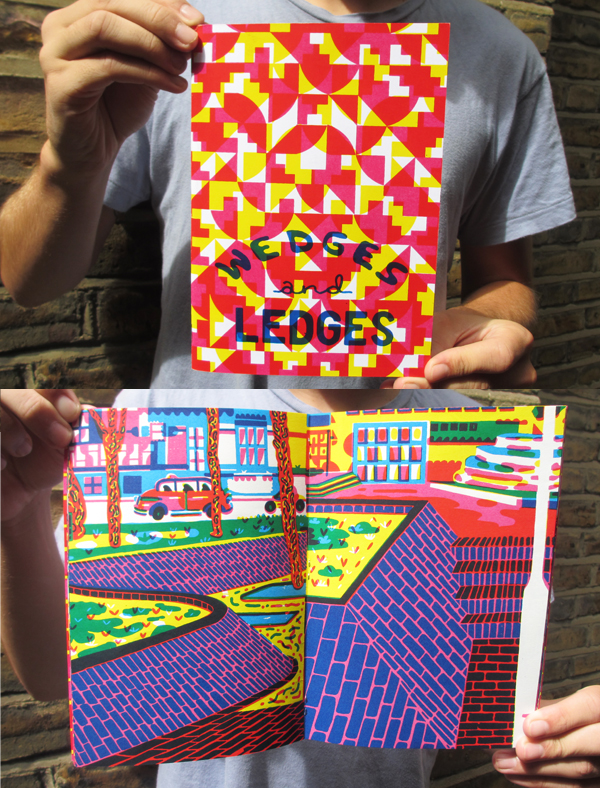 Your work feels sunny, Mediterranean even. How/When did you discover that colour was a medium you wanted to examine and explore?

Rich De Courcy:It was during my second year at Camberwell that I really got into screen printing and Risograph printing. We were lucky enough to have access to a Risograph printer at college and I found it a great way to quickly and easily experiment with overlaying shapes and colours. The main appeal for me was that you had to think about and prepare each colour layer separately and I think there’s something really exciting about printing one layer over another and seeing how the different colours and shapes interact.

Do you start with a photo, a drawing? Could you tell us a little about how you arrive at the finished image? For ‘Wedges and Ledges’

Rich De Courcy: I went out to the spot and just took tonnes of photos from all angles, occasionally I made some drawings, but I was mostly just taking photos. I’d use these photos to make a basic composition of the spread and then loosely draw from them.

Most of the smaller details in the colours and shapes were more from memory or imagination. Before working on the separate colour layers I would make one final line drawing of the composition which I would refer to with all of the layers by using a light box. I drew the layers in black pen starting with the yellow layer. I’d then reference the yellow layer when drawing the magenta layer and so on… 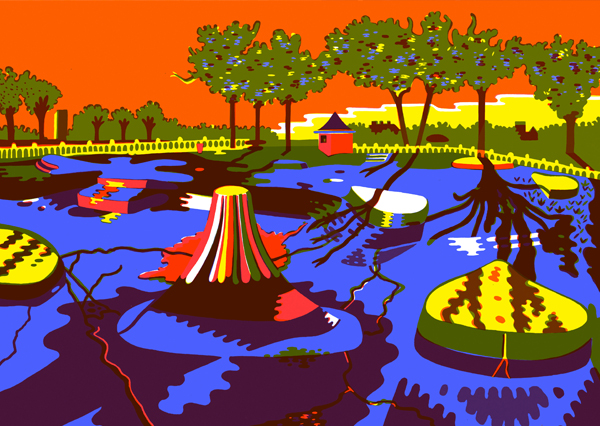 Your imagery is incredibly angular, the lines and visual planes play with your sense of balance. How much has being a skater shaped your sense of space?

Rich De Courcy: Once you have been skateboarding for a long time you see every space and surface in relation to skateboarding. It’s impossible to see a bank, bench or ledge without thinking about skateboarding, thinking what you or somebody else could do on it with a skateboard. I don’t know how this has affected skateboarders’ sense of space in general but I’m sure it does in some way, maybe skateboarders just concentrate on certain aspects of a space more people who don’t skate. 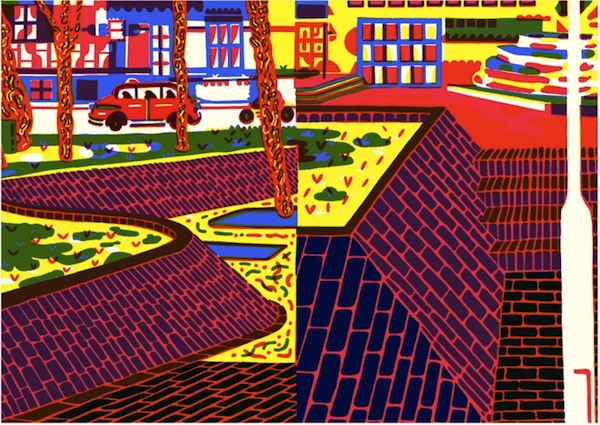 Illustration has always been central to skate culture, from the affinity with street art to customizing boards. How formative was it in the development of your own creative vision and did you have any particular ‘heroes’?

Rich De Courcy: I think most of the things I’m interested in now have somehow stemmed from skateboarding in some way. The Beautiful Losers group hugely influenced my work and my interest in Illustration when their documentary came out in 2008. One of the first skate videos I saw was Girl Skateboards’ ‘Yeah Right’ I repeatedly watched it and became a big fan of Evan Hecox‘s and Andy Jenkins’ Artwork and board graphics for Girl/Chocolate Skateboards and I’m sure Evan Hecox’s blocky images have influenced have influenced my taste in some way today.

Skate culture, by reputation at least, has a very strong community. Is that something you are part of, and do you think there an equivalent ‘illustration’ community? [If there is what do you think are the similarities and differences?

Tell us one thing you took from college?

Rich De Courcy: The main thing is the people I met. Also the time to make work and ability to live in London for 3 years.

Rich De Courcy: I am working in a studio in Peckham along with 6 other Camberwell classmates (Alice Astbury, Alice Tye, Lauren Doughty, Ruta Daubure, Kirsten Houser & Saara Karppinen)  which is really exciting! We’ve been talking about doing an exhibition of some new work in the next few months so watch out for that! I’d love to get the equipment set up to do more screen printing, and continue with that.