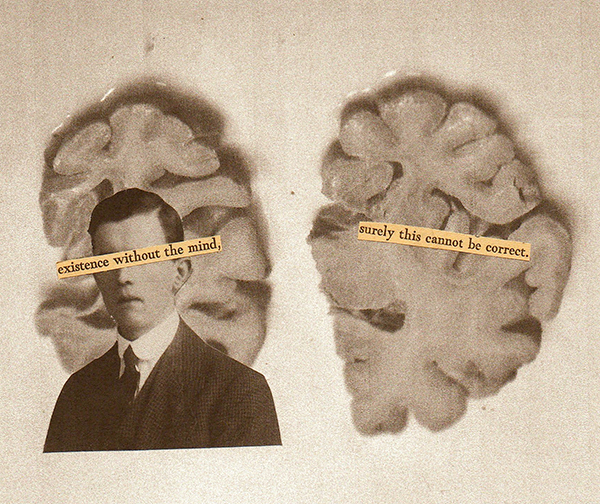 Next up in The Raw and The Cooked, Miranda Foxx is one of a new generation of graduates who are starting to set their own agendas for illustration, writes John O’Reilly.

The most thrilling aspect of this years graduate shows is how young Illustration graduates are not only shaping their own agenda – for anyone who’s watching or listening, they’re shaping agendas for the discipline and practice of what we used to call “illustration”. The old commercial model of illustration has been broken by new technology, and will fragment even further – the simple linear ways of being found no longer apply as portfolio bleeds even further into self-promotion; as old media transitions its way into new media, the forums, platforms and ways of commissioning are changing.

We tend to imagine the future through what Marshal McLuhan famously called the Rear-View mirror – seeing how the world is changing by using the same categories of mind as before, the same, familiar points of reference. The future will be the same as the present – only kind of more. We rarely register significant social or cultural shifts because we can’t see what the present is changing into. Even McLuhan’s metaphor of the Rearview Mirror, while perfectly pictured, feels like it belongs to the great age of the automobile, rather than the age of digital. 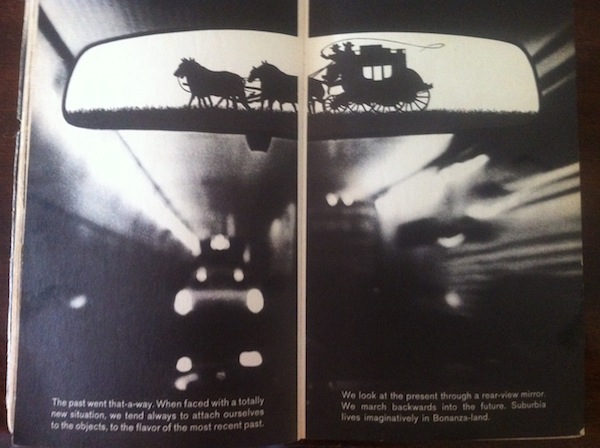 Spread from The Medium Is The Massage: An Inventory of Effects, Marshall McLuhan and Quentin Fiore, Penguin, 1967

One of the reasons we liked LCC graduate Miranda Foxx’s work is that it played with traditional forms of visual narrative, of storytelling as an ‘environment’ as much as a traditional linear narrative, about what ‘interaction’ means.  In fact her mid-term show Cabinet of Curiosities: The Brain excavated the physical form of the book – a rat’s brain (resin) was inset into the book. The work reflects the fact that Foxx used her work as a laboratory to work out some ideas – not least that she is a ‘closet scientist’. 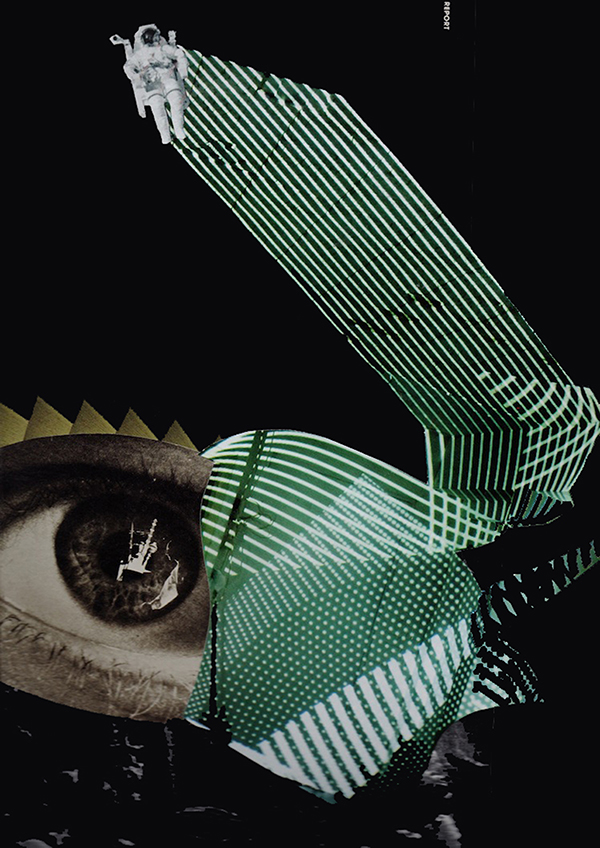 Miranda Foxx, Despair in the Ether

But one of her most intriguing comments was her reflection that among the many influences on work was her fellow students, “opening my eyes to what possible formats and ways you can steer an idea, in the innovative work they were creating around me.”

There’s always a generation gap, but the scale of the change means something different is happening at the moment. There is a tectonic shift in the ‘creative’ industries. In the world of traditional blue-collar industry, Detroit, recently declared bankrupt, displays a very visible geography of change in its ruins. The labour of the imagination doesn’t have that dramatic geography and architecture of ruins to visualize  the technological whirlwind ripping through the creative sectors.

But the old models are broken and aren’t coming back any time soon. While at Varoom we constantly highlight new work, new opportunity and the critical, reflective thinking required to develop insight into commercial possibilities, we also need to be more keenly attuned to the thinking and ideas among students and graduate students. Despite the increase in fees, more students are applying to illustration courses – on the grapevine, significantly more – for a discipline whose traditional career paths are now like those unfinished bridges in Hollywood movies. 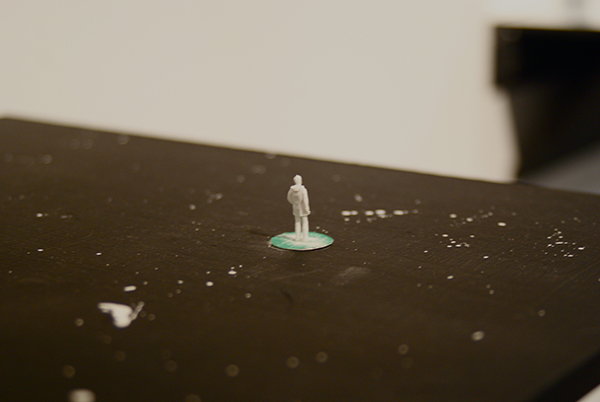 Detail from Despair in the Ether, Miranda Foxx

But a good illustration education will enable graduates to plug into our visually-driven economy  in many new and different ways.  Not just plug-into our visually-driven economy, but change how it thinks and works. And at the very least, a quality education gives you the personal and intellectual confidence, the chutzpah, to be able to say like Miranda Foxx that if things don’t work out, “I’ll drop it all and run off to do a degree in astro-physics or something.”

Varoom: Your work for the mid-term show, Cabinet of Curiosities – The Brain, was about science and art, or at least science as curiosity, spectacle and voyeurism. Your final graduate show was about science and a physical journey and a journey of the imagination. An idea of science seems to be a point of departure for recent work?

Miranda Foxx: After completing my third year of my Illustration degree I realised I probably should have done a science degree. My research for both these projects somewhat consumed me. Cabinet of Curiosities was more of a visual and theoretical learning that I pursued, looking into the era, collecting some rather cool brain specimens and looking into basic neurology. Reading influences my work heavily and I hadn’t realised how much I could enjoy reading about physics, space and time on a factual level. Science fiction previously wasn’t really on my radar until I read Ray Bradbury’s The Illustrated Man, this book of short stories not only has gut punching visuals but explores morality, epistemology, existentialism and all the philosophical jazz that I’m into in a way that I had never experienced – in alignment with time travel and the cosmos. Now unfortunately for all my friends, sci-fi is the main theme for all I read, watch and talk about.

In Despair in the Ether, there’s different planes of storytelling, from 2D prints to the 3D panels, that lead the viewer back and forth. It’s quite a different approach to illustrative narrative? You were exploring this in your mid-term show too? 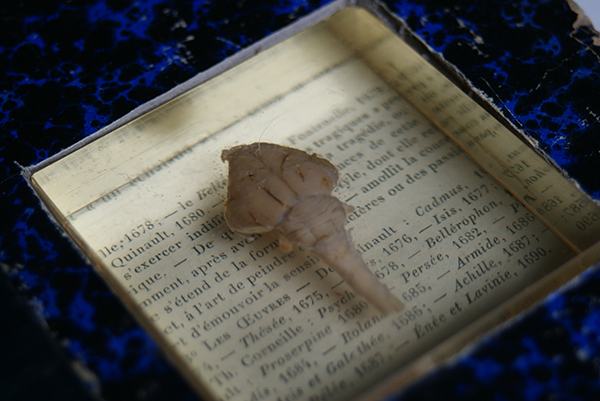 Miranda Foxx: For me, I start in 2D and there is something powerful about then embodying a concept and imagery into 3D because naturally the viewer interacts with the work even just by being able to walk around it. Watching people duck down and look at both the Cabinet’s exhibition piece and the panels at the final show always makes me smile because they investigated it rather than simply looking at it. That’s all I want, is for people to take that extra few moments to have a little closer look. As one is the origin of the other, as opposed to a conclusion, for me it makes sense to put them together, it wasn’t particularly intentional other than that logic.

Which illustrators or writers are important touchpoints for you in this kind of work?

Miranda Foxx: Could be here a while so I’ll just list a few off.

Writers: Ray Bradbury, Paul Auster, Phillip K Dick, Ned Beauman, Franz Kafka, Chuck Palahniuk. Kurt Vonnegut and on a non-fiction note, Stephen Hawking’s “A Brief History of Time” is an essential and quite amusing read. And very honestly, as these were University projects and with my work being so conceptual, it was my peers in Illustration that influenced me the most. In terms of their feedback, encouragement and opening my eyes to what possible formats and ways you can steer an idea, in the innovative work they were creating around me. You should always look at the work around you as it’s the freshest and most interesting because it’s so raw. 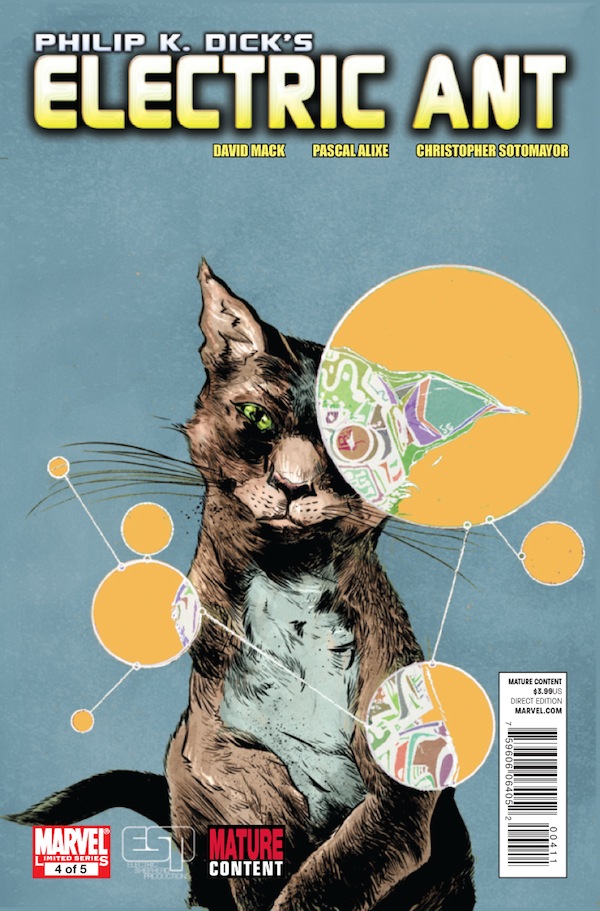 In your Bio you say Miranda Foxx, “Image Maker, Visual Merchandiser, collector. I like to read books and cut them up.” It sounds ritualistic? And just out of curiosity why ‘image-maker’ rather than ‘illustrator’?

Miranda Foxx: There is something slightly ritualistic in it, I read a lot as I may have mentioned and I think I make such an attachment with the physical material that it becomes my natural ‘go-to’ medium. Although I don’t cut up the books I read, that would kill me. I buy a separate for each, but if I like the images in a book or the texture of the page or the actual book itself then I have to find 2 copies. One to destroy and one to keep.

As for being an image-maker, I don’t think I ever really felt like an illustrator. And it opens up peoples’ expectations of what my work might be. A book with a rat’s brain set in resin inserted in it isn’t exactly everyones’ first image when they hear ‘illustrator’. Although saying that, image-maker might not be any more accurate. It’s all subjective at the end of the day I guess.

Tell us one thing you took from doing your degree?

Miranda Foxx: If people don’t really get your work then you’re probably doing it right. But don’t wait 2 and-a-half years to realise that. You have to believe in your work, because it came from your head and that’s something you should always nurture and be proud of. 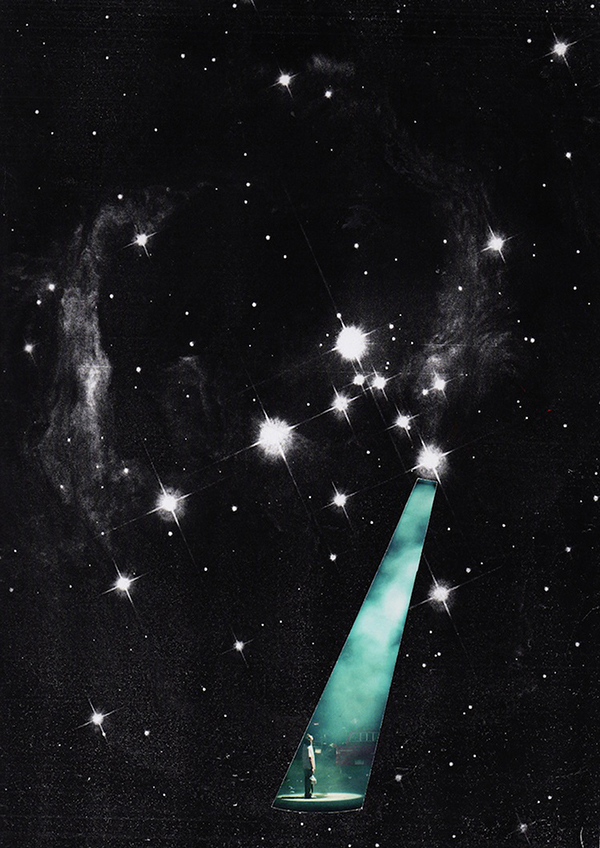 Despair In The Ether, Miranda Foxx

Next steps for Miranda Foxx?

Miranda Foxx: It could literally go anywhere from here. My biggest venture is a project I began during my last year at LCC, its a non profit collective formed in memory of a friend I lost during 3rd year who was a Graphic Design student at Chelsea and we give a third of our profits to the Cystic Fibrosis Trust, the rest just goes back into printing. Young’s Typographic Collective is currently formed of 10 multi-disciplinary designers, we’re working on our second publication at the moment and Issue 1: Memory is on sale online at Rough Trade, KKOutlet and a few other shops so we hope to be going places with Issue 2 and there’ll be a big launch in September that will be a bit different, here’s a video of our first issue’s exhibition launch. We’re currently collaborating with Soapbox Press, a group of journalists on something exciting aimed at 3rd years and recent graduates based on our experiences of graduating and I hope there are a lot more collaborations to come. I’m beginning to work with the Oxfam Bookshops in Victoria creating window displays also, which is a heavenly environment for me and its great to get to work on a big scale too.

Or I’ll drop it all and run off to do a degree in astro-physics or something. 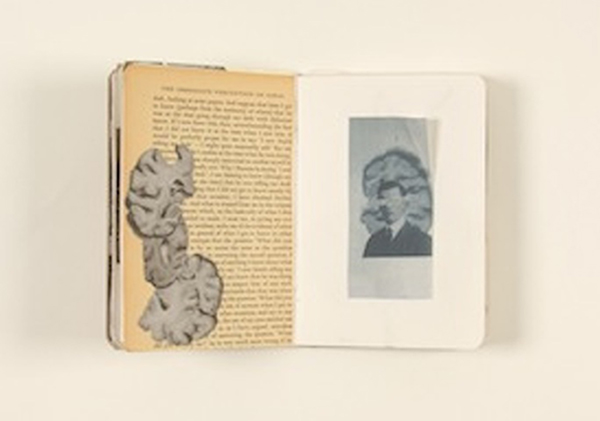