AOI member, Jhinuk Sarkar,Â reports on a recent workshop for the House of Illustration

At the beginning of July I had the pleasure of delivering an illustration workshop for the House of Illustration held at the Foundling Museum in the borough of Camden, London. HOI ran this workshop as a partner of the Pop-up Festival of stories held at Corumâ€™s Fields on the 9th and 10th July.

Working with the Foundling Museumâ€™s Education Officer, the Pop-up Festival coordinator and HOI Education Manager to plan my workshop idea was great fun, and gave me a new area to get excited about in my illustration work.

Delivering and creating work with two school groups from the Islington and Camden areas of London was a new challenge for me. Especially as I wanted the kids to gain a story, the story behind Corumâ€™s Fields and the Foundling hospital for children. I was amazed by the childrenâ€™s engagement into not only the story, but in the image-making process. It was a relief to see that kids still enjoy being hands-on with their illustrations and not just interested in computer games and home time! 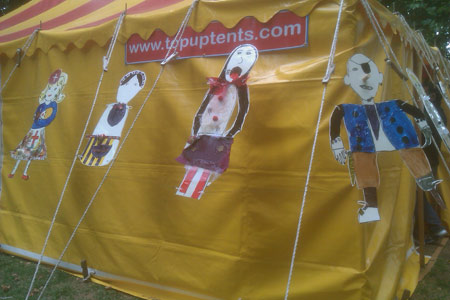 Several other illustrators delivered different and very successful workshops on the same day in the area of Corumâ€™s Fields (The workshops were a follow-on from â€œstory-makingâ€ illustration projects that HOI ran in Pop-Upâ€™s partner primary schools in Camden and Islington as well as a community illustration project for families). The work made during the site specific workshops was displayed during the Pop-up Festival where the children from the 5 participating schools alongside other children and families could see their work proudly on display. 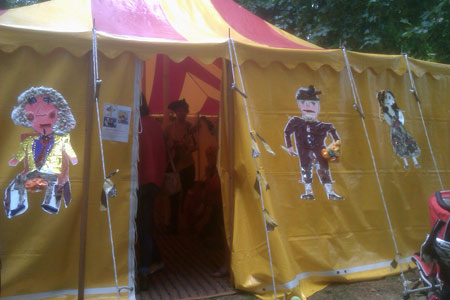 I went to the festival on the first day with my nieces who really enjoyed seeing the different illustrations made by the schoolchildren (as well as having story time with the Moomins and Peter Rabbit). We came away from the festival full of stories and wonderful illustrations in our heads. I hope that House of Illustration can collaborate on more events like this in the future to promote the excitement that illustrations can draw out of stories.